Editor's note: in her book Bright Signals: A History of Color Television (Duke University Press), MCC Associate Professor Susan Murray positions the story of color television within a broader cultural history of twentieth-century aesthetics. In tracing the development and commercial introduction of the technology, she considers the way the idea of color was debated, theorized, and monetized.

The book received the Society for Cinema and Media Studies’ 2019 Kovács Book Award for advancing scholarship in the field and the Michael Nelson prize from the International Association for Media and History.

You begin the book by saying that color television was a hard sell. What explains the cultural anxiety surrounding electronic color in the postwar period?

There are a number of factors at play in the anxieties which circulate around color, but in terms of the television industry specifically, color television (when compared to monochrome) was considered by many to be too complex, expensive, technologically cumbersome, required too much bandwidth and was challenging to stabilize and manage. Sponsors, on the whole, were reticent and consumers were not convinced a color set would be worth the higher price tag. Color had to bring added value to television without being excessive, garish, or unrealistic and early demonstrations revealed that the correct balance was difficult to achieve. You see similar concerns around the use of Technicolor in film during the 1920s- 1930s.

Bright Signals tells how networks sold color television as a new way of seeing. How was this marketed to both advertisers and household viewers?

Yes, it not only represented a new aesthetic for television but also promised a peculiar viewing experience for audiences. Color television was said to produce a unique level of depth and immersion, not even found in color film. It was often described (in marketing and press coverage) as having a “pseudostereo effect,” or giving the illusion of being in three dimensions.

Additionally, networks and set manufacturers made the case (often citing marketing research or psychological studies) that color maintained a unique psychological and emotional hold over viewers that made them more attentive, engaged, and open to the images and claims made before them. In other words, color television was positioned as the ideal form of modern American consumer vision.

Which early TV color programming had the most impact on home viewers? Did these shows succeed in furthering the networks’ goal of a“placing electronic color into the public imagination”?

There was a long period—only 10% of households had color sets even in 1965—when there was only a small audiences of viewers watching color TV at home. However, consumers could also see programs in department stores, in supermarkets, in hotels, and other public places. Network programmers were aware of this and in the 1950s tried to schedule color programming during the day at times of peak traffic stores selling color sets. They also focused on using color for types of programs that were made significantly better by the use of color—sports (you could see team colors and the ball moving across the field more clearly), spectaculars (one-off lavish musical productions with top talent and involved sets) and art and nature documentaries. Also, NBC would identify their color programs with the network ID that carried the tagline “This program is brought to you in Living Color” and their new peacock logo (since they were the network most invested in color) to make viewers aware fo the fact that they might be missing out on a dimension of the program if they were watching on their black and white sets.

Who was one of the more intriguing figures you came across in your archival research?

One group of figures were the network ‘color girls’ who stand before cameras in a studio before the broadcast of any color program while technicians and camera operators made color adjustments in order to best achieve “true” fidelity of flesh tones. Perhaps not surprisingly due to systemic and institutional structures of racism, all of these women were white—fair skinned with usually blonde or red hair. CBS used a woman appropriately named, Patty Painter, from their very earliest color demonstrations and NBC used Marie McNamara. Both these women became celebrities of sorts, appearing on TV programs as “Miss Color TV’ and being profiled by magazines and newspapers. 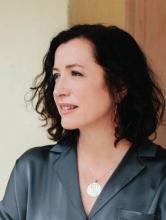 Professor of Media, Culture, and Communication; Director of Graduate Studies