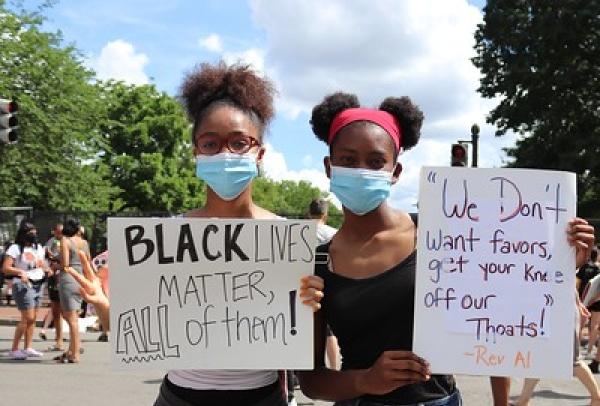 The Revolution is in the Hands of the Young: Youth Organizing and Leadership Spaces

By Hui-Ling Malone and Sara McAlister

“A lot of people at this school district think that PSU is just there to teach students how to protest. When in reality we're learning how to communicate and how to engage our community, and networking, and just working internally. Things that we should've been learning in schools from a young age that we didn't. And I feel like they should be thankful because this is really doing a service to students." -Philadelphia Student Union* member

The widely circulated video of George Floyd, handcuffed and face down while white police officer Derek Chauvin fatally pressed his knee upon Floyd’s neck for over eight minutes, sparked outrage and protests across the country and even abroad. For many young people, this was just the tip of the iceberg. At this point, Ahmaud Arbery’s killers were still free and Breonna Taylor was recently murdered by police officers who raided her home while she slept. The shadows of injustice lingered in the deaths of Tony McDade, Nina Pop, Stephon Clark, Antwon Rose, Korryn Gaines, Sandra Bland, Philando Castile, Alton Sterling, Eric Garner, and many others. The senseless murder of George Floyd reminded young people not only of these widely known cases but the police brutality they constantly witness in their own communities and even in their schools.

For weeks, young people have marched, demonstrated and raised their voices to highlight this injustice which led to all four police officers involved in Floyd’s murder being charged, with Chauvin’s charge being elevated to 2nd degree murder. While some of us are just now awakening to conversations about police brutality, youth organizers across the country have been deeply engaged in understanding the context of these issues and pushing for change. Youth leaders and organizers regularly and intelligently unpack the implications of racial profiling and other structural inequities as they proactively address the consistent criminalization of the people in their communities. Through two longitudinal studies, researchers at NYU Metro Center’s Policy Research and Evaluation (PRE) in partnership with the University of Michigan have had the privilege of following the work of some of these young people who are part of the NYCDOE Borough Student Advisory Councils (BSACs) and a set of youth organizing groups across the country.

Research shows that youth organizing and leadership can act as a prosocial and protective factor for young people who are marginalized by systematic oppressions (Ginwright, 2018). Youth organizing and activism directly engages youth in a structured process to identify inequalities that constrain their opportunities and take collective action to address those injustices. Young people have the opportunity to channel their frustrations into constructive practices that lead to community change. Simply being together, exchanging experiences, learning about local policies, and making meaning of their shared experiences with inequity can help young people develop and heal from the societal trauma they experience.

An NYC BSAC alum reflected, “I’d have to say [BSAC] made me a more critical thinker, because I feel like as students, or as young kids, you complain about all the issues but you never think about solutions. So just being able to share the things with our friends at school, all these issues, but having to be able to think about the solutions. That helps, in a way.”

Surveys of BSAC members suggested that they had more positive engagement with family, community, and society and scored higher than a demographically similar national sample. Further, 75% of BSAC students scored higher than the national sample mean on social skills (the ability of a young person to take others’ perspectives into account, develop a sense of caring, and empathy).

The youth organizing groups we study provide safe, supportive environments where young people are seen, heard and valued. Nearly 90% of young people in our study reported finding and forming communities where they are affirmed in their identities and treated as leaders and capable decision-makers, all while building authentic relationships and solidarity across differences. The nature of YO groups allows for difficult topics to be addressed productively, considering that even when issues impact members differently, members grow to be allies for each other.

A Chicago YO member told us, “I do know that police brutality is a really big factor in both Black and Brown communities, but I think it's a bigger factor in Black communities. So I feel like myself as an ally, but also somebody who knows people who have suffered or gone through that experience, I know it's a responsibility of mine to kind of be able to be there, like create a platform. Not to necessarily speak for myself, but to allow others to speak.”

In the wake of the recent protests, select school districts have been in the news for breaking ties with police departments. While current Black Lives Matter protests may have encouraged the timing of the disinvestment in policing in schools, this is a direct result of young people who have led longstanding campaigns to halt the school to prison pipeline. Thanks to their efforts, the Minneapolis, Denver, Portland, Madison, Oakland, Denver, and San Francisco public school systems have moved to end their relationships with local police departments, and campaigns are underway to do the same in other large cities (such as Los Angeles, Chicago, and Philadelphia).

In each of these cases, youth organizing groups have worked tirelessly to challenge zero-tolerance discipline policies, shift funding from school policing to counseling and mental health supports, and hold systems accountable for the devastating impacts of school policing on BIPOC, LGBTQ, and disabled youth. Even as school districts struggle to engage teens in remote learning, these young people have swiftly mobilized to ensure the raw anger and pain of this moment propels meaningful change. The deep historical knowledge, critical analysis, social-emotional and collaborative competencies, and direct action skills that young people build through organizing and leadership councils have positioned them to make the most of this moment.

Youth organizing groups, BSACs and other activist spaces facilitate a type of collective empowerment that fosters agency to create wide-scale change such as the initiatives to disinvest in policing and criminalization, and instead lean in toward healthier and sustaining environments for young people. Our research shows that youth organizing, leadership and activist organizations are critical for the development of young people. We not only have a lot to learn from youth organizers and leaders, but as the PSU member noted, we have a lot to be thankful for because of them. It’s time to put more trust in the hands of the young, as they are our drivers of change. As one Bronx BSAC member put it,  “I feel like, as us, the younger generation, it's our job to speak up, cause like pretty soon, we're going to be the ones that have to take charge. So why not just start now?”

sara.mcalister@nyu.edu
Privacy Policy Accessibility
This site, and all its contents, are Copyright © 2020 by New York University. All rights reserved