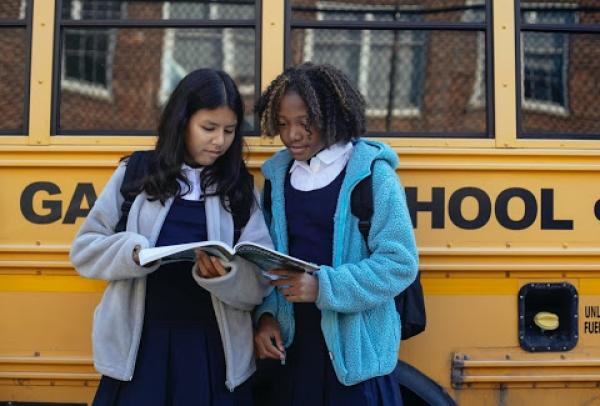 The New York City school system has almost 550 high schools; fifty-six of them are transfer high schools serving students at risk of not graduating. Leaving high school without a diploma was once more common than graduating in the U.S.; the national high school graduation rate only reached 50% in 1940. In the years after World War II, young people without a high school degree had a robust job market to drop into. But by 1970, 80% of the country’s youth had earned a high school diploma, Black and Latinx graduation rates lagged significantly behind white rates, and the formerly robust job market was fading. By 2010, the nation’s graduation rate approached 85% and Black and Latinx rates had narrowed the gap with white rates. But young people without a high school diploma faced a bleak future as technological change, economic globalization and automation shriveled the prospects for meaningful and rewarding work.

Interventions such as transfer schools for students disengaged from high school have a long history in New York City. The first such efforts were street academies and storefront operations organized by the New York City Urban League during the late 1960s. Some fifteen Urban League street academies, financed by major city banks and corporations, collaborated with the city school system to help some 2,000 out-of-school Black and Latinx youth earn their high school diplomas.

By the early 1970s, NYC teachers and administrators had started a dozen alternative high schools for students who’d disengaged from their original city schools. These second-chance settings became known as transfer high schools because students could only enroll in them if they’d left a regular high school before graduating. These small alternative high schools pioneered new forms of curricula and instruction, innovative school structures, and supportive learning cultures throughout the last two decades of the 20th century. Several transfer schools such as the Urban Academy, the network of Satellite High Schools, City as School, West Side High School, Lower East Side Prep (originally an Urban League storefront school), Manhattan Comprehensive Night and Day High School, and Brooklyn Academy High School have been serving over-age and under-credited students for almost 25 years.

By 2000, some twenty NYC transfer high schools were serving some 6,000 students who’d left their original schools and were over-age for grade and under-credited (OA/UC). In 2006, a study by the NYC Department of Education’s Office of Multiple Pathways documented a high school graduation rate of only 19% for over-age and under-credited students. To improve this dismal outcome, the Office of Multiple Pathways began a multi-year effort to strengthen school curriculum, instruction, programming, guidance, support structures, and accountability for those twenty existing transfer schools, and to create some 30 new schools to serve another 7,000 students. Currently, there are 56 transfer high schools including seven charter transfer schools within the city system, serving more than 13,000 students. The table below lists those transfer schools and details their student demographics, their percentages of over-age for grade and under-credited students, and their six-year graduation rates.

The table identifies several key characteristics of the transfer sector’s schools. Transfer high school students are predominantly more Black and Latinx and significantly less Asian and White than the citywide schools’ average. Transfer schools have considerably higher percentages of students receiving Special Education services and considerably more English Language Learners than schools citywide. Transfer schools’ students’ families are much poorer, with an Economic Needs Index of 87% compared to a citywide average of 72%. Finally, transfer schools have a 71% over-age/under-credited population and a six-year graduation rate of 55%. (See the table’s notes for the Department of Education’s definitions of Economic Need Index, over-age/under-credited, and the transfer school graduation rate.)

Some transfer schools are part of networks established to serve disengaged high school students. Good Shepherd Services started one of the earliest programs for second-chance students in Brooklyn’s Red Hook neighborhood as an outreach center of John Jay High School in the 1980s. That center evolved into South Brooklyn Community High School, which became an official transfer high school in 2002 with structural and instructional principles designed for the transfer schools that Good Shepherd subsequently helped to develop–the Bronx and West Brooklyn Community High Schools and the Brooklyn Frontier High School. Another transfer school network originally included the Satellite Academy in lower Manhattan as well as the Forsyth, Schomburg, and Queens Satellite Academies. Those four Satellite schools are now formally independent, and all are members of the New York State Performance Consortium along with the Urban Academy, a founding member.

The percentage of overage for grade and under-credited students is predictably very high because transfer schools target students who struggled academically in their previous settings. Most transfer schools’ percentages of over-age and under-credited students cluster above the transfer schools’ mean of 71% (32 out of 56 schools); only five schools have an OA/UC percentage below 50 percent. Given the many obstacles transfer students encounter, the sector’s six-year graduation rate of 55% seems a highly commendable achievement. But because the federal government’s Every Student Succeeds Act (ESSA) required, in 2018, that all public high schools maintain a 67% graduation rate, the New York State Education Department faces an ongoing dilemma--how to effectively and equitably respond to NYC’s transfer schools’ graduation rates. Since, in the 2019-20 school year, only six of the 56 NYC transfer schools met or exceeded the ESSA 67% graduation standard, almost all the sector’s schools are vulnerable to state regulatory action if their graduation rates do not improve. Thus a sector of schools founded to serve students at high risk of not graduating is threatened even though the transfer sector graduates more than half of the students it initially enrolls.

Given these survey findings, the current demographic and outcome profile of transfer high school students detailed in the table above, and the 25-year history of the transfer sector’s outcomes, current transfer schools deserve an accountability system that assesses students’ credit accumulation rates and progress toward graduation, compared to the same factors in their previous high school experience, rather than an arbitrary graduation standard.

The ultimate reason to sustain and improve the transfer high school sector is that it helps us learn how best to respond to the 15-20% of students who disengage from their original high schools. NYC’s transfer school sector is reducing this percentage by more than half since 55% of the transfer school population currently graduate. We should define the transfer sector as not only an effective recuperative effort but an innovational field in which previously disengaged students are challenged by new forms of curriculum and instruction; where they find support through new modes of programming and guidance structures. The transfer sector’s interventions can help us develop more effective schooling for all our high school students.