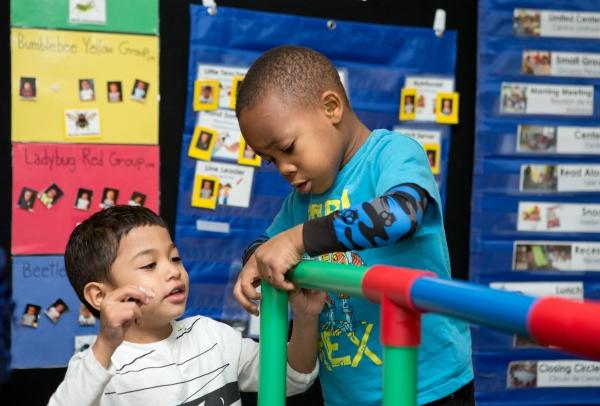 How can we restructure our city’s tattered safety net so that the next pandemic doesn’t decimate the jobs, housing, health, education, and life supports of working New Yorkers? As new vaccines help us immunize against COVID-19, we can reconstruct our city’s safety net to secure the lives and futures of our city’s children and their families. Creating universal, free, high-quality early childcare for the city’s young children should be an essential component of that safety net.

“NYC’s Child Care Affordability Crisis”, recently issued by the Citizens’ Committee for Children (CCC), demonstrates how unaffordable early childcare is for almost all the city’s families. The CCC estimates that 93% of the city’s families with young children cannot afford center-based care, and 80% of the same families cannot afford home-based care. Only NYC’s elite can afford their children’s childcare; what most working families with young children, especially poor families of color, desperately need is almost completely out of their reach.

Mayor de Blasio’s implementation of universal pre-kindergarten for four-year-olds, and his beginning effort to build a universal pre-k program for three-year-olds, suggest what a city administration can accomplish for the city’s young children. Several nations including France, India, England, Sweden, and Denmark have developed variants of high-quality universal early childcare. Senator Elizabeth Warren has proposed a childcare program from birth to schooling entry that would be free for millions of U.S. families and affordable for all.

The need for such a program has been evident for decades. The current pandemic has dramatized how the absence of universal early childcare harms not only young children and their families but also threatens our city’s essential services. The CCC study reports that many families in greater New York City are not working during the pandemic because they are caring for young children. Young working mothers are particularly hard hit; significant numbers of them told the CCC survey they needed to stay home to care for their young children.

A universal free early childcare program would provide safe high-quality developmental care and support for all the city’s young children.  Much research has demonstrated that investing in high-quality early childcare pays for itself many times over. The gains of such programs show up in participant’s post-program schooling outcomes–lower absenteeism, higher academic achievements, higher graduation and college-going rates–as well as across participants’ life experience–lower incarceration rates, higher employment, higher average salaries. Decades of research have demonstrated how the benefits of high-quality early childcare translate into more enriched and fulfilling lives.

Using the lessons learned from the integration of disparate pre-k settings into a citywide pre-k program for four-year-olds, the city should set standards for current childcare providers and expand their efforts into a universal program. The initial annual cost of pre-k for the city’s cohort of some 80,000 four-year-olds was approximately $400 million, which the Department of Education paid for out of its annual budget. The cost of expanding the existing pre-k-3 program, which de Blasio provided for less than half the total three-year-old cohort, could exceed $300 million to cover all eligible children. Assuming lower costs for the remaining early childhood cohorts (birth to 3, with smaller numbers in each cohort) might involve an additional $1 billion, including bringing childcare workers’ salaries up to parity with teachers’ pay. Thus, for less than $1.5 billion annually, NYC could provide free or affordable childcare, from birth to kindergarten, for all the city’s families struggling to provide adequate care for their young children. The gains of such a program–meeting the developmental needs of the city’s young children, alleviating the struggles of the city’s working parents to care for their young children, and reducing the dual burden of work and childcare on the city’s young mothers–would provide huge benefits for the city’s working families and generate significant spillover effects.

But how can the city pay for such a program when it faces severe budget shortfalls caused by the pandemic? The city’s two major funding options–municipal borrowing or increasing taxes–have been preempted by the state legislature and the governor, one of the punitive results of the city’s 1970s fiscal crisis. The city cannot independently borrow the necessary funds from the bond markets, nor can it impose a tax (on the city’s multi-millionaires, for example) without the approval of the state legislature and the governor.

Thanks to recent intensive organizing that elected many progressives to both houses of the state legislature, the State Senate has become super-majority Democratic and potentially veto-proof. (The State Assembly has been overwhelmingly Democratic for many years.) If a powerful city and state movement for universal childcare could persuade both legislative houses to authorize the city to borrow the necessary funds or to levy the necessary taxes, the legislature could override a gubernatorial veto and give the city the power to create a universal childcare continuum from birth to kindergarten.

Given all the other critical policy needs the pandemic’s ravages have dramatized, an unprecedented mobilization would be necessary to convince the state legislature to grant the city the authority to fund universal childcare. How could such a massive mobilization be generated?  The staff of existing programs, along with children and family advocacy groups and citywide childcare coordinating organizations, might take the leading role in such an effort, along with the unions representing the city’s childcare workers. New York’s many civil rights organizations, long-term advocates for the needs of the city’s Black, Latinx, and Asian communities, might identify universal childcare as one of their constituents’ critical needs and join the mobilization. Newer advocacy groups such as Black Lives Matter, Color of Change, and the National Action Network, as well as policy groups such as the Working Families Party and the Democratic Socialists of America, might also identify universal childcare as a critical city need and enlist in the effort. The city’s elected officials, particularly the mayor, comptroller, public advocate, and the City Council, would have crucial roles to play, as would the Assembly and Senate members representing the city in the state legislature.

Listing other potential allies, sponsors, and support organizations could become an endless task because the potential supporters of universal high-quality childcare are so numerous across the city. Success depends on the intensity of the commitment to the vision of a universal program and building the organizing campaigns necessary to achieve that vision.

There are precedents for such a success. The waves of organizing that powered the civil rights movement led to President Lyndon Johnson’s Great Society programs and particularly to Head Start, a national program to provide developmental pre-K programs to poor children throughout the nation. The organizing efforts of the second-wave women’s movement helped establish free neighborhood-based daycare for working mothers in cities and towns across the country. Instead of waiting for whatever childcare policies the new national administration might leverage, New York City could mobilize to become the first U.S. metropolis to provide free high-quality care for all our young children. That seems a vision and a goal worth fighting for.