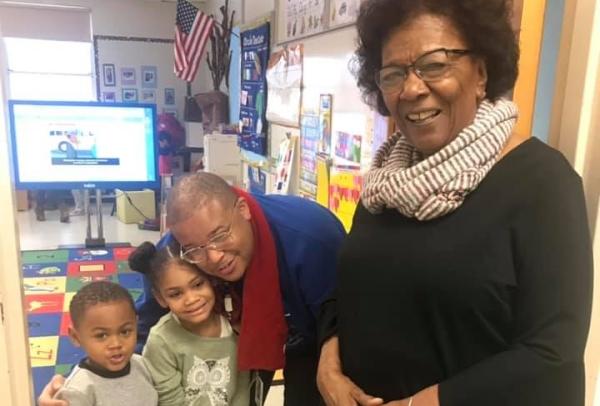 I met Regent Judith Johnson shortly after I became executive director of NYU Metro Center. She requested to meet with me, personally extending an invitation “to talk” via email. Hers was always a personal touch. Rather than having her assistant reach out to me, she reached out herself.

Our first conversation was pleasant. She told me who she was and who she was not. More than this, she told me who I was, speaking of legacy and of past work with NYU Metro Center’s inaugural executive director, Dr. Lamar Miller. She also spoke of working with Dr. Pedro Noguera, NYU Metro Center’s second executive director. Finally, she spoke of a desire to work with me.

In expressing all of this, she spoke of work unfinished, work that no one alone can complete. She spoke of what it means to be Black, which for her was a debt not only to history but also to hope, for, as she put it, “hope had lent some us of a chance to fix broken things.” The “broken things” that she talked about was the severed society that we live in—the redesigned and constantly reinforced segregation of the vulnerable from the privilege and the ways this parsing of the world into colors crafted fault lines against opportunity, reserving access for some while denying it to others.

For Regent Johnson, integration evoked tragic memories, memories that stared at crosses burning in the night, of four little girls buried beneath the rubble of their neighborhood church after it had been bombed, and of countless other incidents that she knew first hand because she had lived them. She recalled that Medgar Evers, the field secretary for the Mississippi NAACP, had been martyred following the Brown v. Board of Education decision primarily for his open contempt for and advocacy against segregation.

She remembered the six Ku Klux Klansmen who, in Birmingham, Alabama in 1957, castrated a Black man after taunting him for “thinki[ing] nigger kids should go to school with [white] kids.” She remembered the scene and signs of white supremacist racial terror, where in places like Mansfield, Texas, the local citizens’ council organized white residents armed with guns and other weapons to block Black children from entering school. The mobs hung an effigy of a Black person with signs attached to each pant leg that read: “This Negro tried to enter a white school. This would be a terrible way to die” and “Stay Away, Niggers.”

She understood that the same courts that decided Plessey v. Ferguson were the same to decide Brown, who just a year later, with the Brown II decision, would walk back its commitment to equal rights, rejecting calls for immediate, federally-enforced desegregation. She understood that these were the same courts that decided Dred Scott, declaring the Fourteenth Amendment to the U.S. Constitution to be a lie. She understood that exclusion from one part of society meant exclusion from other parts of society, that freedom was in direct contrast to segregation because segregation placed boundaries on Black and Brown bodies, fencing them behind walls of racial confinement—what we call the old Jim Crow.

She understood that the internment that segregation implied, the concentration of vulnerability against the opportunity of privilege, could only allow freedom to exist and exalt itself on one side Jim Crow’s invisible barrier. On the other, murkier side, the bondage of a people once enslaved could be redesigned, reimagined, and reinforced either through mass confinement inside the system or through mass confinement outside it—what we call the New Jim Crow.

She understood that our struggle to integrate schools was consistent with our struggle to elevate lives, for schools were not the only spaces given bars. In relation to Jim Crow, racial barriers have essentially been erected everywhere in American society: around dreams and water fountains, from the times we gather to practice faith to the times we gather to break bread.

The fight for integration isn’t to diminish the work of those fighting to fairly fund our schools. That work is important too. It is not in opposition to the idea that all communities should have schools that work for our children. It does not equate the idea that equity in education is synonymous with sending Black and Brown kids to White schools as a legitimate educational intervention. Such a claim is, itself, racist.

In my quiet talks with her, Regent Johnson would explain how the movement for integration is about more than fixing failing schools or about the cosmetics of the American Dream. For her, it was about a much larger struggle—part of an ongoing fight for freedom. And if we resigned ourselves to a separate and unequal society anywhere, then we would live out the spoils of inequity everywhere, not just in schools but also in our neighborhoods and work places, in hospitals and even in our homes.

Segregation would always mean that society would be undergirded by invisible boundaries that would forever forsake the movement of certain bodies, anchored to a history that once saw some of those bodies fettered to chains. It would always mean a binding of opportunity to the upper limits of our prejudice where the grand dream of freedom and the promise of full citizenship would always be far off for far too many people.

She reminded me that this is why so many people died in our fight for integration. They wanted to be full citizens; they wanted to be free and were willing to die for the promise to live. Thus, they died not to be like White people or to be close to them or to just be equal to them. They died so that we all could be free and live collectively in the promises of the American Dream.

Freedom or the fulfillment of dreams cannot be purchased on the cheap. They will not be gained through racial isolation or the manifest temptations of social entrenchment because neither the quick fixes of funding nor of racial separation will cure racism or end white supremacy.

According to Judge Robert L. Carter, famed civil rights advocate and one of the attorneys who helped litigate Brown:

Blacks clearly would have been in no worse position today, in terms of educational benefits in the public school arena, if we had concentrated on an equal facilities goal. . . What makes Brown historic, however, is the fallout effect. It transformed and radicalized race relations in this country, removing Blacks from the status of supplicants to full citizenship under the law, with entitlement by law to all the rights and privileges of all other citizens . . . We now know, of course, that the NAACP lawyers erred. The lawyers did not understand then how effective white power could be in preventing full implementation of the law; nor did they realize at the time that the basic barrier to full equality for Blacks was not racial segregation, a symptom, but white supremacy, the disease.

For Regent Johnson, the unfinished work of integration was about curing the disease beyond simply treating the symptom. And curing the disease is about finally advancing the promise of the Fourteenth Amendment to the U.S. Constitution—that all our children regardless of race, gender, language heritage, socioeconomic status, and so on might inherit the provisions of belonging to a nation described in the U.S. Constitution.

Regent Johnson refused to chew on the cheap bait of racial exclusion even if it meant paying us off to be separate because our birthright is worth more than “a mess of pottage.” This does not mean she excused the debt our nation owes to its citizens of color, for she was a woman of nuance, where a call for reparations could coexist with a push for integration.

Without really knowing me, she told me all of this. During our last conversation, she also told me that she believed in me. For me, this belief was magical. It was kind of like the wind, which carries the potential for fierce and poetic power, and though you can’t always see it, you can ever feel its presence.

Regent Johnson was never delusional in her beliefs. She was prophetic. After our first conversation, we continued to talk over the next few years—sometimes by phone, other times in person, and other times through email. Each conversation, for me, was an opportunity not just to plot the next phase of this dispensation of the movement for civil rights, but also to listen and to learn.

I only knew Regent Johnson for a few years, but I’ll never forget her many lessons. I’ll never forget the pose of elegance that framed her cheeks or the ancient wisdom that sat heavy on her tongue. Being in a room with her was like sitting at the base of an ocean; everything around her felt small because she carried libraries in her palms, pages of history that wrinkled and calloused each hand, physical incarnations of time cut from experience.

Regent Judith Johnson was an education icon—the first African American to win New York State’s Superintendent of the Year Award and member of the Rockland County Civil Rights Hall of Fame. She passed on Tuesday, October 22, 2019; however, her legacy lives on. She was 80 years of age.