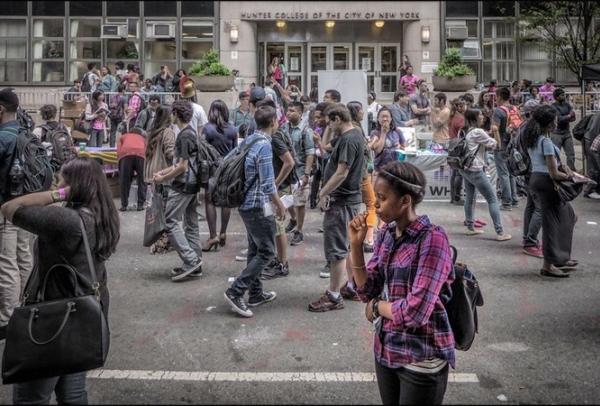 By Norm Fruchter and Christina Mokhtar

During the 1970s, I co-directed an alternative high school for drop-outs in the Ironbound section of Newark, New Jersey. A group of white working-class neighborhood teens who’d left high school before graduating helped to found the school. In our third year, we expanded enrollment to Black and Latinx students who’d dropped out of high schools across Newark. In our fourth year, students and staff began to explore going to college, and one of the founding students, who I’ll call Monica, expressed interest in attending the University of Miami.

I never discovered why Monica was attracted to the University of Miami. But since I regularly visited my mother in Miami Beach, I took Monica on one of my trips so she could tour the university. Monica was very excited by the visit and started the application process, which involved taking the College Board’s SATs, filling out financial forms, planning the application essay, and deciding who her recommenders would be.

Monica was a model student: her attendance was almost perfect and she was scrupulous about completing her assignments. She wrote clearly and succinctly, contributed thoughtful comments in class discussions, and was a respected contributor to our frequent all-school conclaves. She worked assiduously on her application and made another trip to Miami for her official interview. She was very pleased when the University of Miami not only accepted her but also provided a scholarship that covered tuition and most of her living expenses.

Monica was the first in her family to consider enrolling in college. But because none of our school’s teachers had been first-generation college students, we didn’t understand the need to help Monica prepare for the huge transition she faced. So I was upset when Monica phoned in late spring to tell me she’d decided not to continue at the university after her first year. When she came back to the Ironbound we had a series of edgy conversations about why she’d left.

Monica’s difficulties did not seem academic. She found her courses hard but manageable, and her transcript showed mostly Bs and Cs in her major subjects.  Her advisor thought she hadn’t made many friends; Monica’s view was similar. “I was never comfortable there. I felt like I never fit in. I never worked out how to dress appropriately. I couldn’t find my place.”  Later she acknowledged that she’d badly missed her family, her friends, and the neighborhood. Monica was very close to her mother and her two older sisters who had office jobs in downtown Newark. Her father had left the family years ago.

Our staff belatedly realized that Monica’s transition from her intimate web of family and tight-knit working-class neighborhood to the cosmopolitan campus of a huge impersonal university had generated severe culture shock. We began to unpack the class and cultural differences in language, references, assumptions, and stores of knowledge that Monica faced, and we tried to define the supports that might ease the transitions that she and our other first-generation college students had to navigate. Monica joined some of those discussions and after working for a year in downtown Newark, she enrolled in an Allied Health program at the local community college. After balancing office work and college matriculation for several years, Monica got her Associates’s Degree and took a position as an X-ray technician at the new medical center in downtown Newark. Shortly thereafter I left the school and lost touch with her.

During the past fifty years, I’ve often thought about Monica’s University of Miami experience and the college-going patterns of our school’s Black and Latinx students. Unlike Monica, they mostly enrolled in local community colleges and either earned Associate’s Degrees or transferred to four-year institutions. Many of them, like Monica, took time out to work before returning to college. Because we foolishly didn’t track college-going and college completion, I never learned how many of our students had obtained the degrees they’d sought.

Across the five decades since our students began to consider college, many patterns have changed. White student college-going rates have significantly declined, while the percentage of first-generation Black and Latinx students enrolled in post-secondary education has significantly increased. The costs of college-going have skyrocketed, and student college-incurred debt has increased exponentially. Has the transition to college eased for first-generation students like Monica and our high school’s students of color?

Many Chicago graduates took a semester off before re-enrolling–Monica’s pattern. For most students, this time out happened during the first two years of college–again, Monica’s pattern and the pattern of most of our Black and Latinx students. Approximately half the Chicago students who took time off eventually re-enrolled, but about 90 percent of re-enrolling students who took at least one semester off did not complete a Bachelors’s or Associates’s degree within six years. Young women had higher rates of enrollment and persistence than young men.

When Monica and our school’s Black and Latinx students began to explore college-going, few if any sources offered the institutional knowledge to help them make good choices. There were few supports available to help them write effective applications or fill out college aid forms, and no accessible information about how to arrange college visits or seek guidance from alumni.

In 2005, the UYC administered a survey to more than 400 students in 27 city high schools. The survey found that while 90% of the surveyed students wanted to go to college, most weren’t encouraged or supported to pursue their aspirations. Surveyed students indicated that they rarely saw a guidance counselor and couldn’t get help from their school with college-related questions.

The first two SSCs were established at the Bushwick and Franklin K. Lane high school buildings in the 2007-08 school year, in collaboration with the city’s Department of Education. Those two SSCs initially served six high schools in the two buildings, employed 16 youth leaders for peer-to-peer counseling and guidance, and reached more than 3,000 high school students.

In 2011, the DOE introduced college readiness indicators into high school accountability measures. One of the new indicators assessed the percentage of high school students who enrolled in higher education institutions within six months of their graduation. As CARA’s SSC profile indicates, the UYC and other advocacy groups characterized this metric as an unfunded mandate, given that counselor/student ratios in most NYC high schools made it impossible to focus on college counseling, let alone increase high schools’ college-going rates. To mitigate this, CARA pushed the DOE to increase college-going supports and introduced a College Bridge program to train college students to work with first-generation college applicants in their former high schools.

In 2019-20, 17 SSCs served 34 participating high schools, with 120 paid youth leaders who reached 14,000 students. Including the College Bridge program and CARA’s other services, 170 peer leaders counseled 20,000 students, at least 25% of the city’s 12th-grade cohort. According to a 2019 study by the Research Alliance for NYC Schools, the SSCs served high schools with significantly higher percentages of students with economic need, over-age and under-credited students, students in temporary housing, chronically absent students, and English Language Learners than the average for the city’s high schools. In the 21 city high schools with 4-6 years of SSC support:

Across the country, many non-profits like CARA provide similar supports to aspiring first-generation college students. But, efforts to improve college-going supports in high schools should be complemented by structural changes at the nation’s colleges and universities, to make them more accessible to and more supportive of low-income college students. In 2017, Raj Chetty and his colleagues published a study of the contributions of the nation’s colleges to inter-generational income mobility. The Chetty study constructed mobility reports for the nation’s higher education institutions, based on the access those institutions provide to college students whose families were in the nation’s lowest-income quintile, and the percentage of those lowest-income students who moved to the top quintile of the nation’s income earners by the time they were in their thirties. The study identifies a few higher education institutions as “potential engines of inter-generational mobility”.  These institutions–several colleges of the California State College System, the University of Texas at El Paso, and several colleges of the City University of New York (CUNY)–achieve relatively high access for low-income college students and move high percentages of those same students from the lowest to the highest quintile of the nation’s income distribution.

New Yorkers should be pleased that the city school system sends a majority of its college-going students to CUNY, one of the country’s “engines of intergenerational mobility.” But since most colleges and universities do not significantly contribute to intergenerational mobility, we need many more organizations like CARA to increase college access for students from low-income families. But, we also need our nation’s higher education institutions to increase both access and persistence through graduation for the huge numbers of aspiring first-generation college students struggling–as Monica did–to make it to and through college.