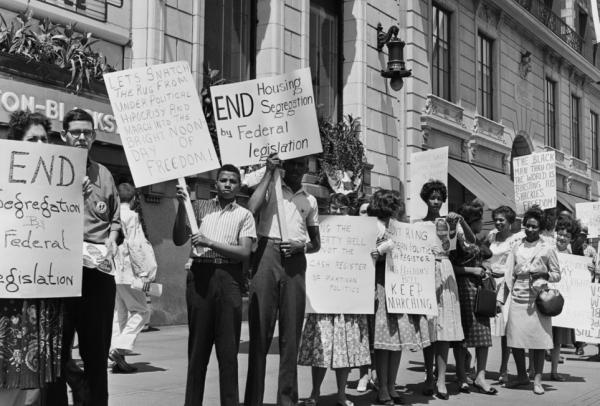 The NYC DSA chapter’s recent cancellation of an address by Dr. Adolph Reed, an African-American Marxist scholar, a distinguished political scientist, and an incisive critic of anti-racist and identity politics. Reed’s talk was canceled because he purportedly planned to argue that the left’s focus on the disproportionate impact of the coronavirus on Blacks undermines multiracial class-based organizing. U.S. radical politics has often been riven by similar disputes about whether race, class, or gender issues should dominate policy, organizing, and advocacy. The following belief statements, promulgated by influential Black political advocacy groups across the past half-century, track the oscillations of class, race, and gender and their intersections, from the 1960s to the present.

The Black Panther Party (BPP) was founded in 1966 in Oakland, and at its peak had chapters in 68 U.S. cities and an international following as well. The FBI mounted a national effort, with state and local police forces, to exterminate the BPP, employing surveillance, harassment, intimidation, mass arrests and assassinations. The BPP platform (below) was drafted in 1966 and widely disseminated in Black communities across the country.

What We Want Now!

The Combahee River Collective was a group of Afrocentric black feminists who left the National Black Feminist Organization in 1974 to create, define, and clarify their own politics and to advance the struggle against racial, sexual, heterosexual, and class oppression. They sought to further the development of integrated analysis and practice based on the interlocking nature of these oppressive systems. What We Believe (below) is excerpted from the Combahee River Collective Statement, published in 1977.

Our politics initially sprang from the shared belief that Black women are inherently valuable, that our liberation is a necessity not as an adjunct to somebody else's but because of our need as human persons for autonomy. This may seem so obvious as to sound simplistic, but it is apparent that no other ostensibly progressive movement has ever considered our specific oppression as a priority or worked seriously for the ending of that oppression. Merely naming the pejorative stereotypes attributed to Black women (e.g. mammy, matriarch, Sapphire, whore, bulldagger), let alone cataloguing the cruel, often murderous, treatment we receive, indicates how little value has been placed upon our lives during four centuries of bondage in the Western hemisphere. We realize that the only people who care enough about us to work consistently for our liberation are us. Our politics evolve from a healthy love for ourselves, our sisters and our community which allows us to continue our struggle and work.

This focusing upon our own oppression is embodied in the concept of identity politics. We believe that the most profound and potentially most radical politics come directly out of our own identity, as opposed to working to end somebody else's oppression. In the case of Black women this is a particularly repugnant, dangerous, threatening, and therefore revolutionary concept because it is obvious from looking at all the political movements that have preceded us that anyone is more worthy of liberation than ourselves. We reject pedestals, queenhood, and walking ten paces behind. To be recognized as human, levelly human, is enough.

We believe that sexual politics under patriarchy is as pervasive in Black women's lives as are the politics of class and race. We also often find it difficult to separate race from class from sex oppression because in our lives they are most often experienced simultaneously. We know that there is such a thing as racial-sexual oppression which is neither solely racial nor solely sexual, e.g., the history of rape of Black women by white men as a weapon of political repression.

Although we are feminists and Lesbians, we feel solidarity with progressive Black men and do not advocate the fractionalization that white women who are separatists demand. Our situation as Black people necessitates that we have solidarity around the fact of race, which white women of course do not need to have with white men, unless it is their negative solidarity as racial oppressors. We struggle together with Black men against racism, while we also struggle with Black men about sexism.

We realize that the liberation of all oppressed peoples necessitates the destruction of the political-economic systems of capitalism and imperialism as well as patriarchy. We are socialists because we believe that work must be organized for the collective benefit of those who do the work and create the products, and not for the profit of the bosses. Material resources must be equally distributed among those who create these resources. We are not convinced, however, that a socialist revolution that is not also a feminist and anti-racist revolution will guarantee our liberation. We have arrived at the necessity for developing an understanding of class relationships that takes into account the specific class position of Black women who are generally marginal in the labor force, while at this particular time some of us are temporarily viewed as doubly desirable tokens at white-collar and professional levels. We need to articulate the real class situation of persons who are not merely raceless, sexless workers, but for whom racial and sexual oppression are significant determinants in their working/economic lives. Although we are in essential agreement with Marx's theory as it applied to the very specific economic relationships he analyzed, we know that his analysis must be extended further in order for us to understand our specific economic situation as Black women.

A political contribution which we feel we have already made is the expansion of the feminist principle that the personal is political. In our consciousness-raising sessions, for example, we have in many ways gone beyond white women's revelations because we are dealing with the implications of race and class as well as sex. Even our Black women's style of talking/testifying in Black language about what we have experienced has a resonance that is both cultural and political. We have spent a great deal of energy delving into the cultural and experiential nature of our oppression out of necessity because none of these matters has ever been looked at before. No one before has ever examined the multilayered texture of Black women's lives. An example of this kind of revelation/conceptualization occurred at a meeting as we discussed the ways in which our early intellectual interests had been attacked by our peers, particularly Black males. We discovered that all of us, because we were "smart" had also been considered "ugly," i.e., "smart-ugly." "Smart- ugly" crystallized the way in which most of us had been forced to develop our intellects at great cost to our "social" lives. The sanctions In the Black and white communities against Black women thinkers is comparatively much higher than for white women, particularly ones from the educated middle and upper classes.

As we have already stated, we reject the stance of Lesbian separatism because it is not a viable political analysis or strategy for us. It leaves out far too much and far too many people, particularly Black men, women, and children. We have a great deal of criticism and loathing for what men have been socialized to be in this society: what they support, how they act, and how they oppress. But we do not have the misguided notion that it is their maleness, per se—i.e., their biological maleness— that makes them what they are. As BIack women we find any type of biological determinism a particularly dangerous and reactionary basis upon which to build a politic. We must also question whether Lesbian separatism is an adequate and progressive political analysis and strategy, even for those who practice it, since it so completely denies any but the sexual sources of women's oppression, negating the facts of class and race.

Black Lives Matter (BLM) was initiated in 2013 as a chapter-based, member-led organization whose mission was to build local power and to intervene when violence was inflicted on Black communities by the state and vigilantes. BLM’s intention was to connect Black people from all over the world who have a shared desire for justice to act together in their communities. BLM currently has almost 20 chapters.  What follows was excerpted from the statement of belief on the BLM website.

Every day, we recommit to healing ourselves and each other, and to co-creating alongside comrades, allies, and family a culture where each person feels seen, heard, and supported.

We acknowledge, respect, and celebrate differences and commonalities.

We work vigorously for freedom and justice for Black people and, by extension, all people.

We intentionally build and nurture a beloved community that is bonded together through a beautiful struggle that is restorative, not depleting.

We are unapologetically Black in our positioning. In affirming that Black Lives Matter, we need not qualify our position. To love and desire freedom and justice for ourselves is a prerequisite for wanting the same for others.

We see ourselves as part of the global Black family, and we are aware of the different ways we are impacted or privileged as Black people who exist in different parts of the world.

We are guided by the fact that all Black lives matter, regardless of actual or perceived sexual identity, gender identity, gender expression, economic status, ability, disability, religious beliefs or disbeliefs, immigration status, or location.

We make space for transgender brothers and sisters to participate and lead.

We are self-reflexive and do the work required to dismantle cisgender privilege and uplift Black trans folk, especially Black trans women who continue to be disproportionately impacted by trans-antagonistic violence.

We build a space that affirms Black women and is free from sexism, misogyny, and environments in which men are centered.

We practice empathy. We engage comrades with the intent to learn about and connect with their contexts.

We make our spaces family-friendly and enable parents to fully participate with their children. We dismantle the patriarchal practice that requires mothers to work “double shifts” so that they can mother in private even as they participate in public justice work.

We disrupt the Western-prescribed nuclear family structure requirement by supporting each other as extended families and “villages” that collectively care for one another, especially our children, to the degree that mothers, parents, and children are comfortable.

We foster a queer‐affirming network. When we gather, we do so with the intention of freeing ourselves from the tight grip of heteronormative thinking, or rather, the belief that all in the world are heterosexual (unless s/he or they disclose otherwise).

We cultivate an intergenerational and communal network free from ageism. We believe that all people, regardless of age, show up with the capacity to lead and learn.

We embody and practice justice, liberation, and peace in our engagements with one another

norm.fruchter@nyu.edu
Privacy Policy Accessibility
This site, and all its contents, are Copyright © 2023 by New York University. All rights reserved