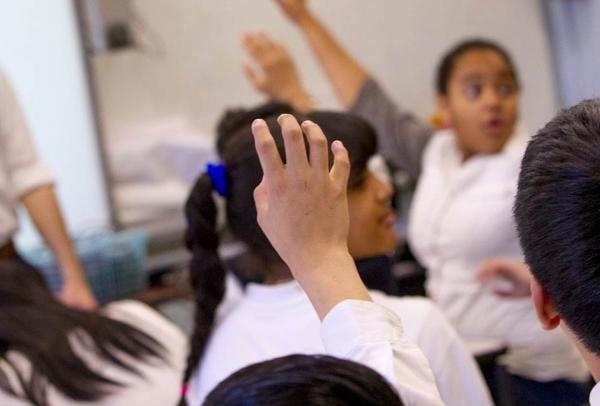 The history of people marked as raced is distinct from those marked as dis/abled, but those experiences overlap in U.S. education. Bodies marked simultaneously as raced and dis/abled are uniquely positioned for separation, seclusion, and segregation; however, in U.S. charter schools it is not fully clear how these intersections are impacted. While many high-performing charter schools have a strong record of improving outcomes for Black, Latinx, and economically less advantaged students, they have also long been criticized for shortcomings in serving and supporting students at the intersection of race and dis/abilities. Indeed, there is evidence that disproportionality for students of color with dis/abilities in charter schools goes beyond identification and can be seen across the student experience—in enrollment, exclusionary discipline, performance/academic achievement rates, and transitions to post-secondary education.

While we recognize that no single definition of disproportionality is universally accepted or applied across educational research, even as researchers debate whether students of color are over- or under-represented in special education identification, we wonder if the attention given to this binary is the right focus. Indeed, scholarship has tried to determine whether and to what extent vulnerable students are over- or underrepresented in special education, placing significantly less emphasis on similar disparities in experience. Theoretically, the phenomenon of disproportionality occurs when projections of difference by ability and culture collide in a single body that becomes doubly marked as “matter out of place” by its distance from the cultures and abilities typically privileged in education (Adams & Erevelles, 2016). Thus, disproportionality is less about achievement or opportunity gaps than it is about what we see as an experience gap. Thus, the political construction of experience in education reveals a demarcation of intersecting differences that advance disparity and, in some cases, a crisis of missed instruction that can dramatically impact learning. However, all too often bodies of color are reduced to singularities throughout our education systems, stripping them in ways that perpetuate the experience gap as contrasted against the privileges associated with normalized notions of ‘being’—an inherent confluence of physical and cognitive normalcy defined by the construction and perpetuation of a mythical good, acceptable, whole person.Thus, we studied disproportionality by focusing not on under/overrepresentation of bodies as they pertain to outcome categories but by focusing on the experiences of students of color with dis/abilities and by following the outcome patterns (better or worse) of students in public charter schools in CA, FL, TN, TX, WA. We excluded alternative charter schools, virtual charter schools, and juvenile justice facilities operating as charter schools from the main analysis. Our final data sample consisted of charter schools in CA, FL, TN, and TX that met our criteria. Our total sample, after data cleaning, included a maximum of 2,511 charter schools across the five states and a total of 1,034,176 students for AY 2015-16. We also looked at data for AY 2013-14, and AY 2011-12. We could not go back farther because the proliferation of charters in the U.S. is relatively recent, and the years we studied presented the most reliable data. In all, our sample comprised data from 2,587,136 students. Here’s what we found:

Segregation in charter school mirror national trends that show patterns of racial isolation; thus, a good number of students of color with dis/abilities in charter schools experienced their education in racial isolation. In all states, at least a third of the schools sampled were hypersegregated, meaning they enrolled 90% or greater of students of color. TN was by far the most segregated, followed by TX. In both states, the majority of charters were hypersegregated.

Across the full sample of all states and in all years, the identification rates of IEPs were greatest for multilingual learners and Black students. This pattern held true across gender, though male students were more likely to be identified for an IEP than female students. Students with dis/abilities, which in our sample skewed Black and multilingual (a category that, itself, skews heavily Latinx) were least likely to be supported and gain access to the full curriculum. For example, In California, the identification rates for Latinx students for IEPs were roughly equal to that of White students in each year; however, White student were more likely to find support through 504 plans when compared to all other student groups. In terms of gender, Black males had the highest identification rates for IEPs across the full sample at 5.3%. Here we get a picture of who students with disabilities in charters in the states we studied were: They were disproportionately male, multilingual learners, and/or Black and Latinx. This does not mean that young women and girls were not part of the picture. Whereas, young men and boys a more significant population of students with disabilities in charters, the representational gaps between White and non-White students, and monolingual students and multilingual students hold in spite of gender, and, in some cases, disparities intensified between non-White and White, monolingual and multilingual women and girls.

Generally speaking, out-of-school suspensions decreased from 2011-16 across all racial groups and in the focal states. The noticeable exception were White students in Tennessee, which seemed to be an outlier case. Still, across all other states and in all years, White students maintained lower suspension rates than non-white students who, in most cases, were two to three times more likely than White students to be suspended at the secondary level.

With the exception of TN, the suspension numbers for young men and boys was fairly black and white. In CA and FL, Black male students with disabilities were 3 to 4 times more likely to be suspended than their White peers. In TN, White male students, who made up a small population of students attending predominately Black schools and—we speculate—were likely to be less economically advantaged, were more likely to be suspended. However, across all states and in all years, suspension disparities intensified between non-White and White, monolingual and multilingual women and girls.

Across charter schools included in this analysis, there were over 112,000 days of lost instruction due to suspension in 2015-16. Across all respective states, Black students overwhelmingly experienced higher rates of lost instruction in comparison to other student racial subgroups, losing instruction 4-7 times the rate of White students.

Perhaps the most salient conclusion that we draw from our findings is that we cannot improve the education of students of color with dis/abilities unless we fully understand how they are experiencing education. As Harvard policy scholar Anne Lieberman has so aptly reminded us: “The extent to which we can resolve an issue depends on how well we understand it.” Thus, our tendency to reduce disproportionality to an equation of over and under-representation, to strip from it both the physical and psychological narratives of experience that help us to understand the sheer substance of educational inequity that patterns itself along social lines, has led to a venality of the idea and a mismanagement of treatments to resolve it. In this report, we rethink disproportionality, exploring—as our findings suggest—how social location shapes not only the outcomes but also the overall school experiences of students with dis/abilities. In doing so, we found that Black and Brown students with a special education label were less likely to be supported than their White counterparts but more likely to experience exclusion and a loss of instruction. In the policy and practice sections of this report, we further illustrate how color evasive stances seem to shield the processes through which these students are not only marked as dis/abled but also stigmatized across other intersecting variables such as language and socioeconomic status. For students of color with dis/abilities in charter schools across CA, FL, TN, TX, and WA, the issue wasn’t necessarily about over- or under-representation in special education; the issue was about whether special education meant a better or worse school experience. In this report, we suggest that, for students of color, identification worked interdependently to mark the dis/abled person as doubly less-than normal; moreover, this intersectional interdependence tended to be cloaked beneath a discourse of hyper erasure while the school experience tended to be less filled with promise.

Given this reimagining of the problem, the report raises implications for how research evidence can be leveraged to better understand the institutional realities of our most vulnerable students, highlighting a key tension in our data around systemic problems vs. non-systemic solutions. Thus, we conclude the report with a brief discussion and set of systemic recommendations for how to close the experience gap and bring our best hopes for supporting our most vulnerable students to life. We hope that these recommendations provide an important blueprint for educators and policymakers who desire to close the experience gap by continually working to improve existing school systems, regardless of their current effectiveness. The evidence that we provide in this report strongly suggests that we can get closer to improving school systems by focusing on improving the experiences of students of color with dis/abilities in them. Our recommendations for closing the experience gap include the following: