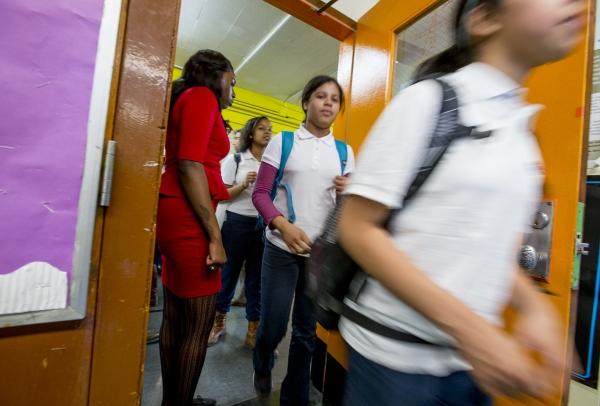 Research has demonstrated important connections between students’ sense of safety—both physical and emotional—inside their schools and outcomes such as academic effort and achievement. At the same time, there is growing awareness of problems associated with so-called “zero tolerance” approaches to school safety, the widespread use of suspensions, and the involvement of the criminal justice system in schools. In response, a number of school districts, including New York City, have begun focusing on approaches to student discipline that reduce the use of suspensions.

Safe Public Spaces (SPS), designed and led by Engaging Schools, aims to establish a safe and supportive school environment by training all members of a school’s staff to promote positive student behaviors and interactions, and prevent, understand, and respond to disciplinary infractions. SPS focuses on applying consistent and firm discipline policies while keeping students in their learning environment and providing them with needed supports. SPS trains staff to: (1) promote a safe, welcoming, and orderly school culture through practices such as increasing the frequency of adult-student interaction, (2) prevent illegal and aggressive/violent behavior by monitoring public spaces prone to high rates of problem behavior (e.g., cafeterias, hallways, entranceways) and placing trained staff in those areas, and (3) intervene at times of conflict and follow up using protocols and restorative interventions to meet the context of the situation.

To understand whether, and how, participating in SPS improves school safety and climate, the American Institutes for Research (AIR) and the Research Alliance are conducting a mixed-methods study of SPS’s implementation and impact. The study includes 24 NYC middle schools schools—12 of which were randomly selected to participate in the program, and 12 that will serve as a control group.

We will address these questions by collecting data from educators—in SPS schools and comparison schools—about the services, policies, and procedures they use to foster safe and respectful public spaces; we will also conduct observations of SPS staff training programs and of key public spaces within the schools.

Findings from our implementation study will be combined with those from AIR’s impact study, which will explore whether schools participating in SPS provide a safer environment than schools that do not. Ultimately, we hope that this study informs future efforts to develop practical, replicable strategies for improving school safety and climate that reduce reliance on removing students from the classrooms.