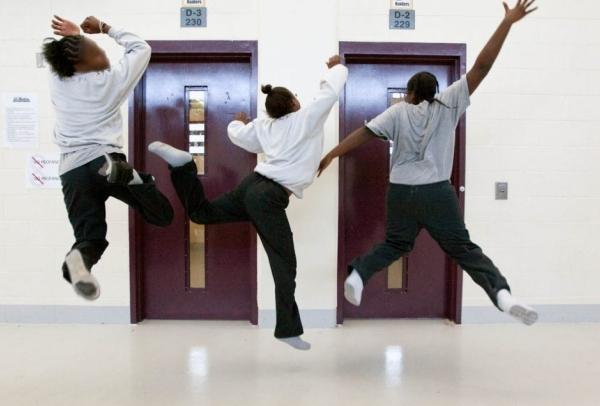 2017 was a monumental year for criminal justice reform in New York. At the State level, Raise the Age legislation was signed in April, promising that young people who commit non-violent crimes will receive intervention and evidence-based treatment. Around the same time, New York City announced a plan to close the jails on Rikers Island within 10 years, replacing them with a “smaller, safer, and fairer” system.

The scientific community has an immediate opportunity to study, inform, and guide the implementation of these policies and programs as they roll out over coming years, and Drs. Shabnam Javdani and Erin Godfrey, faculty affiliates at IHDSC, are doing just that. They have been actively developing a research program focused on juvenile justice and child welfare settings in New York City, and have formed partnerships with key agencies, non-profit organizations, and advocacy groups within these areas, such as the New York City Administration for Children’s Services (NYC ACS), the New York State Permanent Commission for the Safety of Children, and the Vera Institute of Justice.

IHDSC staff member Chris Barker recently spoke with Drs. Javdani and Godfrey about their experiences on the ground.

Research on juvenile justice and child welfare systems represents a growing area at IHDSC, and you’ve been instrumental in making that happen. How did you first become interested in these topics, and what prompted you to collaborate with each other?

Javdani:  Each year, there are 1.7 million delinquency cases and 3.2 million child abuse reports in the United States, and these kids experience significant disparities and challenges. In some ways, the juvenile justice and child welfare systems represent a microcosm of the social stratification and social inequity that play out in society at large. These systems are also charged with some of the most drastic responses to kids – such as confinement, removal from their homes, and making decisions about their daily lives without them. We feel that they are crucial to examine when thinking about how to improve societal well-being at large.

Godfrey:  We both have training in community psychology and share an interest in how settings function. That is, we recognize that people’s behavior and outcomes are influenced by the spaces they inhabit. We know a lot about the spaces of other settings youth are in – for example how classroom climate influences learning — but next to nothing about what juvenile justice settings look like, smell like, or feel like, let alone how they influence youth’s well-being. We realized that there are real opportunities to understand and improve dozens of juvenile justice settings in NYC, so we created a collaborative multi-pronged project called RISC – Reducing Inequality in Settings of Care – to do just that.

Your work within these contexts goes back a few years. What are some of the previous projects that got you here, and how might recent policy changes impact your work going forward?

Javdani:  Since I came to NYU in 2012, I started talking to juvenile justice and child welfare system stakeholders and administrators — asking questions about what they needed and what areas they felt challenged in. Their response, uniformly, was that they needed services for kids in short term confinement and that they needed help serving girls in general. This launched two sets of projects that focused on providing programming and supports to foster the wellbeing of youth in about 7 short-term facilities (Skills 4 Life). It also led to a larger initiative to implement and experimentally examine an advocacy model (ROSES) that I developed to target supports for girls in the community and upon release from facilities.

NYC has a history of implementing initiatives that can create rapid change in kids’ lives – they have reduced their foster care placements by almost 30,000 in recent history. Recent policy changes in York City, such as Close to Home, Raise the Age, and plans to close Rikers Island, have made huge shifts in the structure, role, and composition of juvenile justice settings. Moving forward, all youth sentenced to placement in NYC are to be housed in small group-home facilities that are close to home, scattered throughout the 5 boroughs.

Godfrey:  There is huge variability in what these group-home settings are like, in simple physical features like whether there are locks on internal doors and in terms of the culture of interaction between youth and staff. We really wanted to capitalize on this history of innovation to understand what these new close to home structures are like and how they can be supported to improve outcomes for kids. We’ve also quickly learned that there is no systematic training for this workforce, and that frontline staff are open to innovative practices. We’ve added a prong to our research that provides and evaluates training for frontline staff to help them build the skills they need to effectively respond to youth’s needs and to reduce burnout and turnover.

Since Raise the Age legislation passed in New York, advocacy groups have shifted focus to issues around implementation. What role should the research community play as the implementation process begins?

Godfrey:  Decisions are being made about how to spend money and resources linked to Raise the Age. It is critical to be targeted about where to effectively support prevention activities. Research has a role to play in determining what the most effective programming and service provisions are, and in supporting effective facilities that promote the wellbeing of youth. Research also helps us support the staff who are interacting with youth.

Javdani:  Raise the age effectively widens the net of crime and processing in the juvenile justice and child welfare systems for kids, which could result in some unintended negative consequences. It is critical for research to play a role in understanding whether this policy shift will increase disparities. “Net widening” refers to a pattern where formal systems – like courts – extend the scope and role that they play in the lives of families. When the net is cast broadly in the absence of adequate services, families may feel like they are largely being scrutinized and monitored instead of being supported. These net widening practices have historically been linked to poorer outcomes for families in urban poverty — especially women and girls.

Godfrey:  One of the projects we are working on, in collaboration with the Vera Institute for Justice, is investigating the pathways through which kids – particularly girls – from middle and high school come into contact with law enforcement. This work will allow us to understand the school and geographic areas that are most implicated in the school-prison pipeline, and identify prevention and intervention activities that can be supported as Raise the Age is implemented.

Research played an instrumental role in informing Raise the Age legislation. Are there other social policies or practices within the realm of juvenile justice or child welfare that should be updated based on what we already know from existing research?

Javdani:  Juvenile justice systems should not be set up to confine kids. A “lighter touch” is strongly supported by research, and relying less on confinement as a solution will also allow us to focus instead on increasing support in and strengthening communities. Research evidence from numerous fields offers support for the “ripple effects” of actions that invest in communities in ways that are sustainable and driven by local need.

Javdani:  We can’t forget that prejudice, discrimination, and stereotyping exist within these systems. The evidence is undeniable that people make split-second decisions based on stereotypes and prejudices. These inform how they interact with and treat people based on their race, ethnicity, gender, sexual orientation and class. This plays out in who police decide to prosecute, whether criminal behavior is attributed to situational vs. individual factors, how juries view evidence, and how frontline staff provide care. The juvenile justice and child welfare systems need to recognize that these prejudices exist and build policies and procedures to counteract and limit their negative effect on youth.

Godfrey:  Alternative programming targeting youth’s sociopolitical development is also needed. Study after study suggests that fostering marginalized youth’s ability to think critically about social inequalities and injustice, and supporting their ability to take action, is good for them. It improves their psychological well-being and occupational outcomes, and also makes them more likely to engage in civic activities like voting. We need to provide youth in the juvenile justice and child welfare systems with real opportunities to reflect and learn about power, privilege, and disparities in their worlds, and to take steps to change the world around them for the better.

Javdani:  Ultimately, we need to understand these settings better so we can build fewer of them and fully support the ones we have – and center the experiences of kids and the needs of frontline staff in this effort.