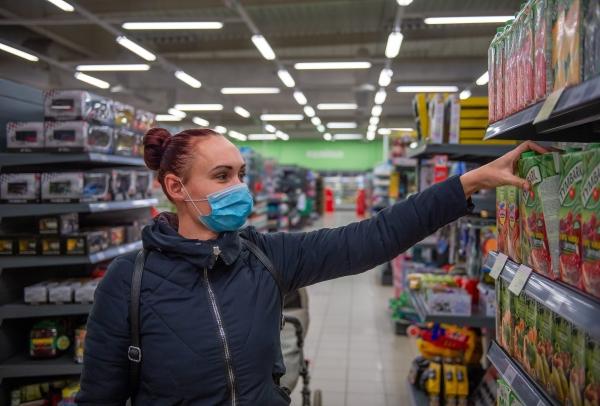 Examining Prevalence Among Undergraduate Students Before and During COVID-19

College is a time during which individuals emerge into young adulthood with the opportunity to create their own habits. Dietary intake for students is determined by food access, availability and affordability and the food landscape around them. While approximately 11% of households in the United States met criteria for food insecurity in 2019, an estimated 39% of students responding to the #RealCollege survey in the same year experienced food insecurity during the preceding 30-day period. Previous research similarly finds that the prevalence of food insecurity among university students can range anywhere from 15 to 59%. A 2018 review of food insecurity among US college students emphasized that tuition and housing financial obligations coupled with educational expenses (i.e. textbooks, computers) are key drivers in the financial insecurity afflicting college students across the United States, regardless of the type of institution they are attending. This was particularly pronounced among college students who identified international status and receipt of student loan or need-based federal financial aid. Therefore, our collaborative research group from the School of Global Public Health’s Nutrition Program and Steinhardt’s Department of Nutrition and Food Studies, sought to examine the food insecurity prevalence of undergraduate students at NYU. This was a pilot study to test the methods and questions prior to developing a multi-campus study, with the ultimate goal of designing an intervention to alleviate this problem.

In the fall of 2019 we surveyed undergraduate students, yielding responses from 257 students. Students were mostly female (81%) and enrolled full-time (97%). Forty percent of the sample self-identified as Asian. The majority of respondents were either sophomores (33%) or juniors (30%). The prevalence and severity of food insecurity were assessed using the U.S. Household Security Survey Module, 6-item short form. The questions cover a range of experiences over the previous 12-month period including food not lasting through the month, inability to afford balanced meals, cutting the size of meals, eating less and feeling hungry for lack of money for food. Food insecurity levels were determined based on the sum of responses and students were categorized with high or marginal food security (no or few problems accessing adequate food; score 0-1), low food security (reduced quality of diet; score 2-4), or very low food security (disrupted food intake due to inadequate resources; score 5-6). A total of 41% of student respondents in the first wave of data met criteria for food insecurity on the NYU campus.

Although food insecurity is estimated to have increased across the United States during COVID, Pew Research Center analysis of monthly census bureau data estimated that 52% of young adults aged 18- to 29-years-old were living with one or both of their parents in July 2020. The finding indicates that approximately 2.6 million adults moved in with a parent between February 2020 and July 2020. A known leading factors associated with student food insecurity is their increased financial burden of independent living. It is estimated that students in New York pay approximately 40% more for rent than the national average, and 40 to 50% more on basic food items.  While it is counterintuitive that students at NYU reported less food insecurity during COVID-19, moving out of New York City and instead living with a parent may have alleviated the financial burden faced by students, where food costs are often considered a fluid expense that is often sacrificed for fixed costs of housing and tuition among students. This evidence indicates a greater need for structural changes in food support provided to students living on and around campus in this urban university setting, particularly as they prepare to return to campus under increasing financial instability.

As the next step, we plan to test a novel app, called Food2Share, that is currently being developed by our research team. The app connects food insecure individuals with food establishments in an effort to recover food that would otherwise go to waste from restaurants, supermarkets, and other food establishments. The primary aim of the app is to improve and scale food salvaging and redistribution efforts in the city.

With lessons we learn from this pilot study, we plan to expand this research to other campuses, to 1) establish the baseline rates of food insecurity; 2) identify the at-risk persons; and 3) implement interventions in order alleviate food insecurity in our New York City community of young adults. Inadequate consumption of fresh and nutritious foods and increased consumption of inexpensive highly-processed ready-to-eat industrial food primes the young adult for chronic diseases in later adulthood. We believe that tackling food insecurity will help individuals emerge as healthier older adults.

This research was conducted as part of the "Improving Nutrition Literacy Among Children and Adolescents" IHDSC working group.