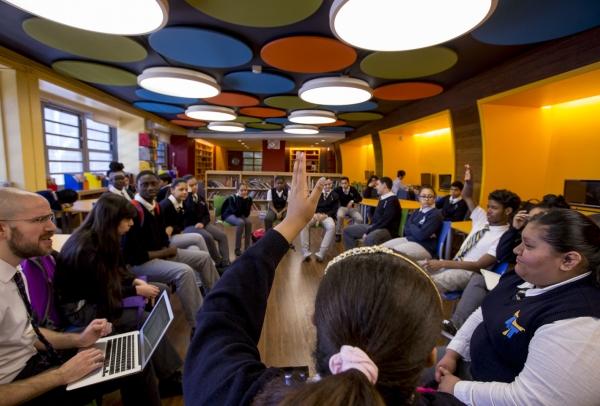 NYU Metro Center has 15 years of being the contractor for New York State Education Department (NYSED)’s Technical Assistance Center on Disproportionality (TAC-D). Based on best practices from TAC-D, Innovations in Equity and Systemic Change (IESC) is a restructuring of TAC-D, offering educational institutions customized systemic equity work, including utilizing a set of tools and expertise to assist districts and schools in reducing disparities in the assessment, placement, and outcomes of students across race, socioeconomic status, and abilities. Findings from TAC-D’s work indicate that after four years of implementation (with high fidelity), districts and schools achieve statistically significant results in closing racial gaps across achievement, graduation, special education placements, and school suspensions.¹

In 15 years, we have had embedded partnerships with 75 school districts in New York state and provided trainings2 to 70 districts in all regions of New York state. Participants who complete the culturally responsive education sequence show positive changes in awareness of both racial privilege and institutional discrimination measured by Colorblind Racial Attitudes Scale (CoBRAS), suggesting that TAC-D influences participants’ personal mindsets (PRE Report, 2018).

Based on the 2018 evaluation report completed, five implementation fidelity indicators were identified to measure a district’s progress in shifting disproportionality and inequitable outcomes. These indicators center on logistic coordination, buy-in, dissemination and follow-up, attitudes and beliefs, and response to change.³ Based on the testing of the fidelity indicators, results indicate that logistic coordination of the scope of work is instrumental to moving districts, buy-in of district leadership is also critical, such as, having a “champion” of the work. Dissemination and follow-up are also important indicators for progress. We have found that building capacity for participants to lead the work is transformative for districts. That is, in districts/schools dissemination and follow-up is also connected to response to change from participants who have not been involved in trainings (i.e., indirect participants). When districts/schools strategically disseminate the work to indirect participants progress is made. Finally, attitudes and beliefs are centered on assessing the level of resistance to addressing disproportionality and inequitable outcomes in districts that may impact their progress. When shifts occur in these fidelity measures, changes can occur in inequitable outcomes.

What are the outcomes Metro Center-IESC measures?