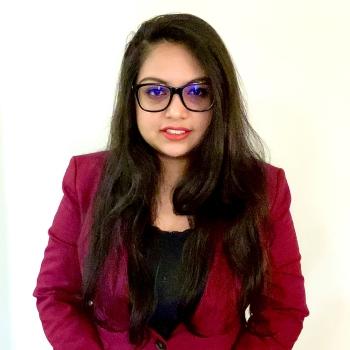 Salwa is an interdisciplinary scholar and engages with theoretical frameworks from political theory, media studies, legal anthropology, and science and technology studies. Her doctoral dissertation examines legal pluralism in Bangladesh through a comparative analysis of the use of technologies in “secular'' state courts and “Islamic” non-state courts in order to rethink the law of evidence and discourse of rights. Technologies play a central role in legal research and formulating admissible evidence in court. There is an accelerating global push to digitize courts and a prevalent assumption in contemporary societies and scholarship is that modern “secular” state courts are “objective” and engage with cutting edge AI technologies, which make them superior to other legal proceedings that do not use such technologies. Salwa’s dissertation challenges this prevailing perception and demonstrates how AI technologies can distort and/or erase subaltern socio-legal realities and further ostracize individuals and groups that are already living in the margins. The aim is not to reinforce a binary between Islamic and secular law since state and non-state courts interact and influence one another; rather, the goal is to challenge dominant epistemologies and unveil how technologies alter form and meaning(s) when they cross transnational borders. Examining the intersection between law and technology in Bangladesh, not only includes an under-studied region within current scholarship, but also connects its particularities to broader issues of erasure, hierarchies, and prejudice embedded within the theory and praxis of code and the rule of law, which can be relevant for analyzing techno-legal issues in other geopolitical spaces.

Salwa holds a Master of Arts in South Asia Studies (concentrations: Political Theory and History) from Columbia University. Her M.A. thesis suggests that the meaning(s) and development of secularism in Bangladesh is complex and explains why attempting to universalize and impose a religion/secularism binary is problematic. Salwa has a Bachelor of Arts in Communication and English (Honors) from the University of Washington. Her English honors thesis explores biopolitics and neocolonial power in postcolonial Southeast Asia, namely how power is reinforced subliminally in the form of choice.

Salwa teaches courses at NYU with her designed syllabi. The course - Rise of Internet Media - focuses on the histories and imaginations of the internet, the internet’s database logic and algorithmic systems, and digital political economies. The course - Media Audience - focuses on how media and communication studies grapple with understanding the relationship between media and audience and/or technology and user. This course encourages students to question and problematize the notion of “audience” and “user” and rethink concepts such as “agency,” “resistance,” and “power” in media theory.