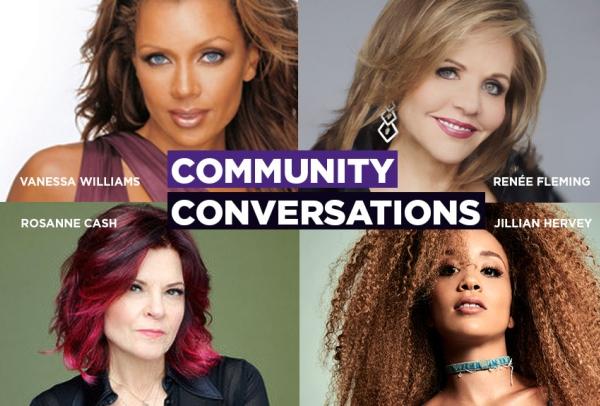 Join NYU Steinhardt’s Department of Music and Performing Arts Professions in welcoming our 2020-2021 Dean's Scholar-in-Residence, Vanessa Williams, when she hosts Rosanne Cash, Renée Fleming, and Jillian Hervey for an in-depth-conversation about Women in Music.

These four illustrious artists, representing a remarkable range of diversity of background, genre, and experience, will discuss the roles women have — and have not — taken in the worlds of performance, composition, and production;  the obstacles they face, and the progress that needs to be made.

Vanessa Williams is one of the most respected and multi-faceted performers in the entertainment industry today. NYU Steinhardt is proud to have Ms. Williams as our Dean's Scholar-in-Residence.

A graduate of Syracuse University, Vanessa is a strong advocate for equal rights, especially concerning the gay community and minorities. Her charitable endeavors are many and varied, embracing and supporting such organizations as Black Theatre United, Special Olympics, Broadway Cares-Equity Fights AIDS and several others. She was honored with the Human Rights Campaign “Ally for Equality” Award for her humanitarian contributions. Vanessa also achieved a career pinnacle with a star on the Hollywood Walk of Fame in 2007.

Rosanne Cash is one of the country’s preeminent singer-songwriters, Rosanne Cash has released 15 albums of extraordinary songs that have earned four Grammy® Awards and 12 nominations, as well as 21 top-40 hits, including 11 chart-topping singles.

Cash is also an author whose four books include the best-selling memoir Composed, which the Chicago Tribune called “one of the best accounts of an American life you’ll likely ever read.” Her essays have appeared in The New York Times, Rolling Stone, Oxford American, The Nation, and many more print and online publications. A new book, Bird on a Blade, was recently published by UT Press, combining images by acclaimed artist Dan Rizzie with strands of lyrics from a variety of Cash’s songs.

Renée Fleming is one of the most highly acclaimed singers of our time, performing on the stages of the world’s greatest opera houses, concert halls, and theaters. This sixteen-time Grammy® nominated artist has recorded everything from complete operas and song recitals to jazz and indie rock.

Her voice is featured on the soundtracks of the Best Picture Oscar winners The Shape of Water and The Lord of the Rings: The Return of the King. Known for bringing new audiences to classical music and opera, Renée has starred in and hosted an array of television and radio broadcasts.

Jillian Hervey is an American multidisciplinary artist and front woman of the electronic soul duo  LION BABE. Hervey studied dance at the New School, where she also became interested in performance art. During her time there, she began working with eventual Lion Babe collaborator Lucas Goodman.

LION BABE are known for their unique sound and look blending vintage colors with modern sonics. They started with their break-out single “Treat Me Like Fire” in 2012, which quickly garnered attention across the globe. The success of their major label debut, which included stand out collaborations with Pharrell Williams and Donald Glover, led to worldwide recognition and global brand campaigns from Pantene, MAC Cosmetics, and major festival performances at Coachella and Afropunk.